Important for transformation of the energy system

New world record: Scientists at the Karlsruhe Institute of Technology (KIT) increased the manufacturing speed of electrode foils coated batch-wise by a factor of three – to 100 meters per minute. This was achieved by a flexible slot die process that enables production of any pattern with high precision and at high speeds. Thanks to the patented new technology, electrode foil production speed is increased by a factor of 3. As a result, lithium-ion batteries can be manufactured at much lower costs.

Lithium-ion batteries are important for the proclaimed “Energiewende”, the transformation of the energy system. They are needed for the storage of electricity from fluctuating renewable sources or for the operation of electric vehicles. However, high costs still represent a major challenge, which has to be faced for the technology to be competitive. After three years of research, a team headed by Professor Wilhelm Schabel and Dr. Philip Scharfer of the Thin Film Technology (TFT) group of the KIT Institute of Thermal Process Engineering has succeeded in increasing the speed of intermittent production of the electrode foils representing the actual energy storage systems to 100 meters per minute. So far, 25 to 35 meters per minute have been the industrial state of the art. Within the project “Competence E”, the scientists developed a revolutionary coating technology, by means of which it is not only possible to produce continuous coatings, but also patterns featuring high precision. A patent has been filed for this invention.

Transporting big boxes, holding shopping bags, or carrying suitcases to the plane or taxi: Often, we would like to have a second pair of arms for routine work. Many flows of materials and goods at factories and workshops take place manually. An electrical “gofer” is needed, which is controlled by natural gestures, relieves the workers of heavy loads, and transports them independently. This is done by the assistance system FiFi of Karlsruhe Institute of Technology (KIT). It is now being tested in first industrial pilot applications.

“FiFi is an assistance system we developed to support man in his direct environment. It can be controlled in a contact-free manner”, Project Head Andreas Trenkle, KIT, explains. The mobile platform equipped with a camera system is particularly suited for dynamic material flows at factories and workshops. These flows require high flexibility and are usually executed by man. Typical examples are high bay warehouses for car spare parts, consumer products of big online traders or deliveries of goods between departments of big companies.

Students build a single seat formula racecar with which they can compete against teams from all over the world. The competition is not won solely by the team with the fastest car, but rather by the team with the best overall package of construction, performance, and financial and sales planning. 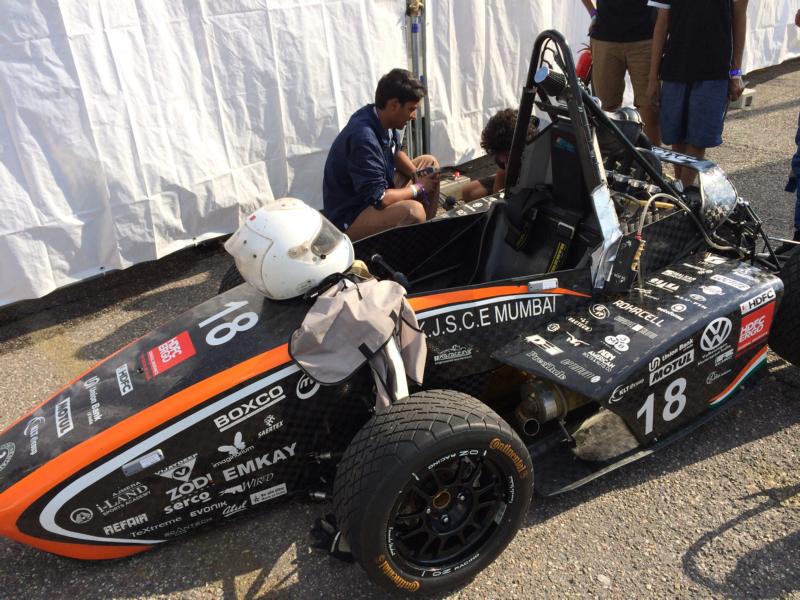 FSG in Hockenheim Photo: RE

Mercedes-Benz is teaching autonomous cars how to speak

Mercedes-Benz, robotics experts and linguists discuss how people can communicate with autonomous vehicles in the future. Traffic in the city of the future will be largely dominated by cars that drive themselves. Beyond the technical and legal aspects, the automotive manufacturer is therefore looking very closely at social issues in this context. Communication between people and machine intelligence is a key aspect here.