Center of excellence for vocational training in India E

Center of excellence for vocational training in India E

Center of excellence in India

The German Federal President Joachim Gauck in february visited the Bosch Vocational Center (BVC) in Bangalore. On his tour of the center, the president was given insights into the Bosch Group's activities in vocational training, and in particular how it trains young people in India for technical trades. 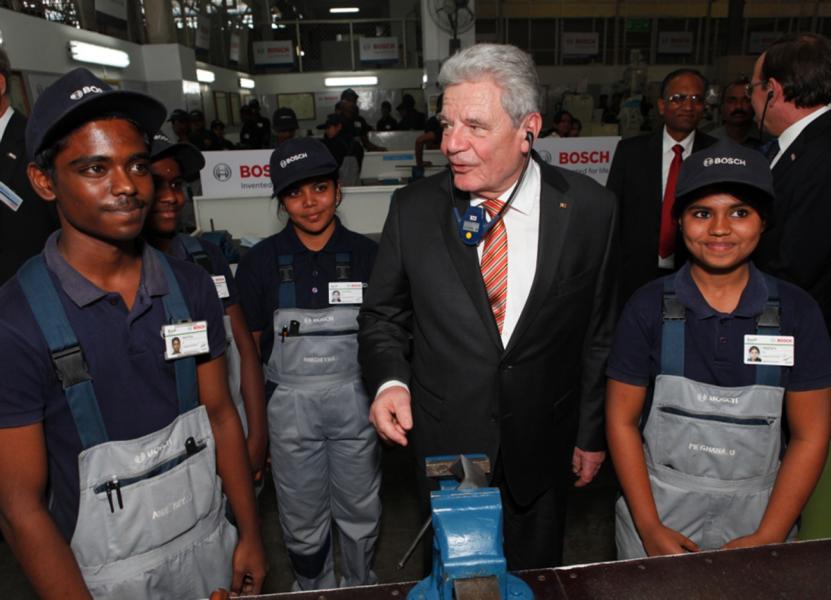 German Federal President Joachim Gauck at the Bosch Vocational Center, Bangalore. On his tour of the vocational center, the president gained an insight into the Bosch Group’s activities in vocational training, and particularly how it trains young people in India for technical trades. Each year, 60 young people start a three- or four-year apprenticeship at Bosch in India. Since it was founded in 1961, the Bosch Vocational Center (BVC) has trained some 2,400 apprentices in seven trades. Foto: Bosch

“Bosch as a company has always been acknowledged for its commitment to building talent and contributing back to the industry, thus looking beyond immediate financial gains,” said Germany's Federal President.

“The number of people being trained at the Bosch Vocational Center exceeds the company's own personnel needs; this demonstrates its responsibility to Indian society and makes it a true role model.” President Gauck's tour took in the apprentices' workshop and the mechatronics laboratory, where state-of-the-art equipment and machinery are used to prepare apprentices for their later careers. The president used the opportunity to speak with a number of Indian Bosch apprentices about their experience with the German vocational training model.

A proven model for developing skills

Each year, 60 young people start a three- or four-year apprenticeship at Bosch in India. Bosch trains more people than it actually needs in India, and in this way fulfills its social responsibility to provide vocational training for young people.
"We see it as an essential part of our corporate philosophy to offer apprenticeships, thus enabling many young people to get a head start in their careers,” said Peter Tyroller, the Bosch board of management member responsible for Asia Pacific. “For more than 50 years, Bosch in India has developed extensive expertise in the realm of occupational training. The proven Bosch model helps us ensure the high quality-standard of our products and maintain our competitive edge.” 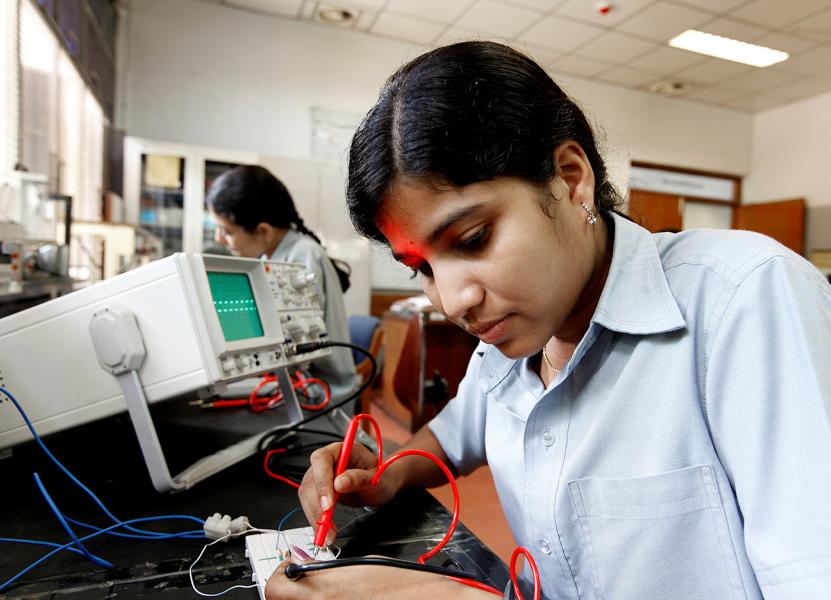 Training at the BVC in Bangalore takes its lead from the German vocational training model. More than 20 percent of the curriculum is taken up with theory, while 30 percent focuses on gaining practical skills and abilities in the apprentices' workshop. The apprentices spend roughly 50 percent of their time on the shop floor, where they put what they have learned into practice.
Sixteen instructors train the young people in seven trades – as electricians, for example, or as mechatronics engineers, toolmakers, and machine operators. A total of 172 apprentices are currently being trained, of which 28 are young women.

Since the Bosch Vocational Center was set up in 1961, just under 2,400 young people have been trained at Bosch. During this time, the company's apprentices have won 211 gold medals in national competitions run by the Indian Ministry of Labor and Employment to find the best apprentice. In addition, the BVC has won the Indian president's “Best Establishment Award” 46 times – a distinction that no other company in India has received.

Many Bosch locations outside Germany now offer training according to the proven German method – for example, in China, India, and Brazil. In Asia especially, there is a great need for qualified skilled workers. Bosch is currently setting up a vocational training center in Vietnam. And in Thailand, a vocational training alliance is being launched. In Russia, Bosch has been offering vocational training based on the German dual model since January 2014, initially for twelve apprentices.
Moreover, an international apprentice exchange has been offered at Bosch for 50 years now. Currently, some 20 percent of each year's trainees in Germany have the opportunity to discover other countries' ways of working, and to gain intercultural experience. The aim is to help young people develop into independent and responsible professionals who are also efficient team players. Roughly 6,100 young people around the world receive occupational training at Bosch, around 4,300 of them in Germany.

Information: Bosch has been present in India since 1922. The company currently employs some 26,000 associates at 10 manufacturing sites and 7 research and development locations in the country. In 2012, Bosch generated sales of 1.5 billion euros in India. Bosch is further expanding its business: in 2014, it will invest some 160 million euros in extending its Indian locations, www.bosch.com